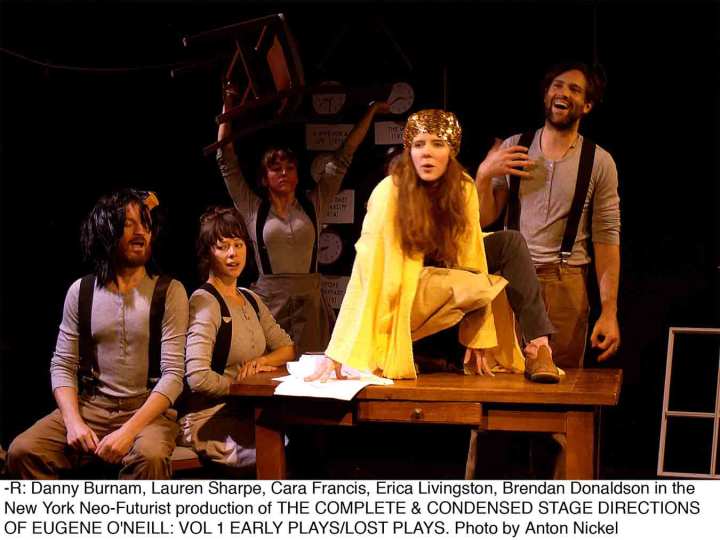 For me, stage directions have been the literary equivalent of butlers; unless they seem out of line, I don’t really pay attention to them. That changed, however, after I saw The Complete & Condensed Stage Directions of Eugene O’Neill Vol. 1 Early Plays/Lost Plays by the New York Neo-Futurists. I met with director and adaptor Christopher Loar to talk about his research and creative process surrounding this American theatre icon, and I fully intended to write about that for the blog.  However… my mind just kept coming back to stage directions. What was it about them that the Neo-Futurists had hit upon; what were the stage directions doing for them? What could stage directions suggest that subsequent volumes may have to offer?

a) oui, c’est banal, mais cette banal Americaine a demandé, qu’est-ce qu’on peux faire: notes separated (either by italics or indentation) from  the dialogue; they indicate a character’s actions or emotions, and (ostensibly) are not meant to be read aloud

Luckily, there was more to it than that. For all of their everydayness, stage directions shed light not only on individual style but have a key role in theatre history and the evolution of character, and continue to assist (or hinder) our ability to capture the human spirit in an already ephemeral medium.

A World and a Play Without Stage Directions?

So when contemporary theatre artists read playwrights, even great ones, who wrote lengthy stage directions, this assumption is bound to affect how the playwright is viewed. Loar, as he wrote in the program notes, surmised that O’Neill was a “paranoid” writer for whom stage directions were “an insurance policy of sorts against anyone screwing with his plays; it was as if he wrote them in fear of unworthy actors and directors.”

Assumptions aside, the majority of plays use stage directions to record entrances and exits. Most plays also use them to show action. Corneille felt that it was right for playwrights to “mark in the margin the same actions which do not warrant his burdening his verses with them.” Over the years and styles of plays, the dialogue-to-stage-directions ratio ranges from dialogue-centric drawing-room plays (Wilde) to action-centric mime plays (Handke and Beckett).

The Neo-Futurists are all about action. As stated by founder Greg Allen, they seek “to present actual life on stage by creating a world in the theater which has no pretense or illusion.” Neo-Futurists don’t pretend to be someone else, and they don’t pretend to be doing something they aren’t; “all tasks are actual challenges.” Vol. 1 follows a perfect format for the company: a narrator gives the stage directions to the actors, transforming all of the stage directions into tasks.

Allen also writes that there is “no need to ‘act’ tired as you enter the stage with an empty suitcase. Fill it up with rocks, run around the block three times. You’ll be tired.”  If that sounds literal, interpretations often are in Vol. 1. How do you do half of a whisper? “Whis.” An actor literally “sniffs a scandal.” When the audience is told “there is an interval of three minutes in which the theatre remains darkened,” yes, the company and audience spend a full 3 minutes in darkness before continuing. Vol. 1’s literalism, as well as the ensemble’s excellent timing, is kinetic.

Stage Directions and the Narrative Voice

But there’s more to stage directions than action or paranoia. According to Pavis, starting with eighteenth and nineteenth century writers such as Marivaux, Diderot, and Beaumarchais, “dramatic writing is no longer self-sufficient; it needs a mise-en-scene that authors endeavor to provide through their stage directions.” Why? Characters were increasingly “socially marked individuals,” and in order to capture “the character’s interiority and the mood of the stage,” stage directions had to change. Pavis notes that “this information is so precise and subtle that it requires a narrative voice. Here theatre approaches the novel, and curiously enough it is just when it aims to be believable, objective, ‘dramatic’ and naturalistic that it falls into psychological description and resorts to a descriptive or narrative approach.”

Although the practice of theatre making has changed since Beaumarchais, contemporary playwrights still use a narrative voice in stage directions. Take, for example, this stage direction from Angels in America: “Harper is having a pill-induced hallucination. She has these from time to time. For some reason, Prior has appeared in this one. Or Harper has appeared in Prior’s dream. It is bewildering.” Clearly, this is more than just an action. Tony Kushner isn’t just handing out information neutrally—and, really, would he ever? It isn’t dictatorial or prescriptive; in fact, as he seems to enjoy undermining the assumed clarity of the stage direction. That’s what I expect of Kushner. That’s a narrative voice.

It may seem a bit of a disappointment to develop a narrative voice in stage directions that is then never heard, since stage directions are not read aloud in performances. They’re only heard in staged readings  or productions with a narrator. That makes giving stage directions voice and center stage all the most novel for the Neo-Futurists. 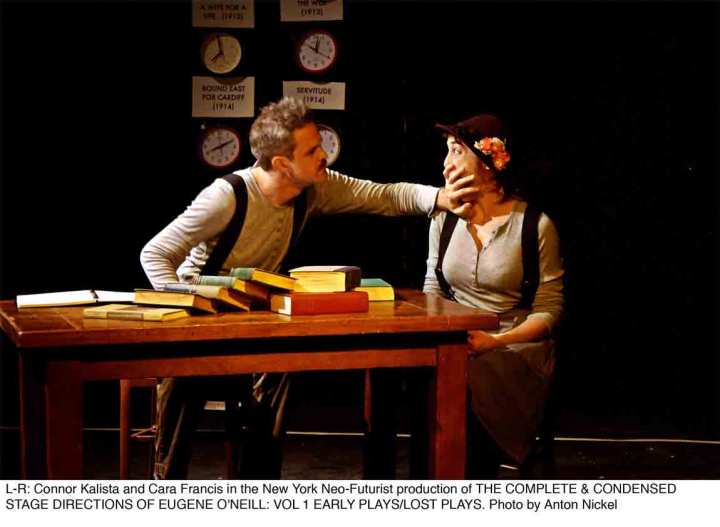 To be fair, O’Neill’s stage directions weren’t that far from descriptions of emotions as they were described by scientists like Darwin or studied by psychologists like William James, which Eric Bentley records in The Life of the Drama.  However, to contemporary audiences they come across as histrionic and requiring close-up shots to show just how their “nostrils dilate” and or to catch as an actress “flushes red.” O’Neill was particularly impassioned in writing about eyes: “wild with feverish eyes,” “expressive eyes,” “intelligent eyes,” “eyes staring from sockets,” eyes in which “a light of a dawning madness is dancing in,” and “she has large eyes which she attempts to keep always mysterious and brooding”—and, ah, how the Neo-Futurists have fun interpreting that.

The impossibility of completing a stage direction is comedic, particularly when an actress struggles to be “an American girl suffering from delusions of being a Russian heroine,” or an actor has decide how to “get ready to crush her with the weight of his eloquence.” And when combining a literal interpretation with O’Neill’s psychological description and attempts to sum up a character and his or her motivations, the Neo-Futurists’ hit comic payload. I won’t reveal how Neo-Futurists accomplish the task of flushing red—you deserve to see it.

And see it you may! Loar initially hoped to do all 52 of O’Neill’s plays. Now, focusing on plays that fit the Fair Use law aka those written pre-1923, they’re considering only doing 32. Loar, however, is undaunted, and plans for Volume 2 are underway. Loar argues that a benefit to seeing the body of O’Neill’s works (particularly in condensed versions) is that audiences are able to quickly recognize reoccurring traits and themes, particularly significant themes in later plays. Loar plans on exploiting these repetitions as well. Since several characters in multiple plays engage in the same actions, he plans on using these actions as “portals” in which a character crosses from one play to another where the same action would have just occurred.

Volume 1 is almost entirely a comedy. The ensemble experimented with incorporating serious plays in it, but the plays were cut in order to keep a unified style and tone. Volume 2, Loar relates, will have plays in which serious actions take place. But for a company that does not “play characters” or “manufacture emotions” or “pretend to be somebody else,” can stage directions be anything more than comedic?

In one of his best-known early pieces, Bound East for Cardiff (1914), a man keeps vigil over his dying friend. The Neo-Futurists literally interpreted the actions, without any pretence to create a character or to manufacture emotions. All of this fit the Neo-Futurist aesthetic and principles. The result? It was considered by reviewers one of the least successful parts of the production.

That said, undoubtedly if Loar set out to create a serious play, he and the ensemble would have made entirely different choices in setting up and interpreting the stage directions in that scene. Perhaps they would have chosen not to be so literal, or not to focus on psychological descriptions or draw out the melodrama. Perhaps they would have given more gravitas to the narrative voice by creating stillness on stage. Perhaps I’m limiting tragedy to fiction.  But if upcoming volumes are serious, will stage directions be enough?

I hope that we all get to see.

*If you took a theatre history or play analysis class, did you cover stage directions much in your theatre studies? Please comment below.